»The Aurora Monsters-The Model Craze That Gripped The World«

The annual Rondo Awards 2010 has been given away and the DVD »The Aurora Monsters-The Model Craze That Gripped The World« won »Best Documentary«. Well deserved in my opinion (in fact I voted for it), it's a passionate tribute to the classic AURORA Monster Kits and the talented people responsible for bringing them to life during the »Monster Craze« of the 1960s. 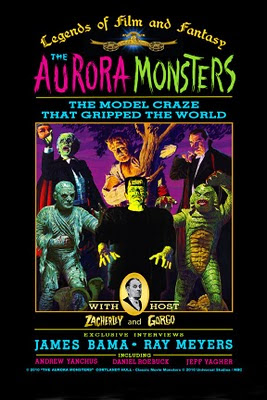 The documentary is written, produced and co-directed by Cortlandt Hull (who is also the man behind the wax museum called the »The Witch’s Dungeon«) and puppeteer Bill Diamond (of »Fraggles« fame). Congratulations! Their labor of love is available on DVD through his own website. Here you can see Mr. Hull with his old fiend Zenobia .... 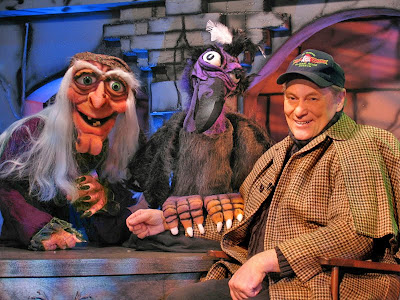 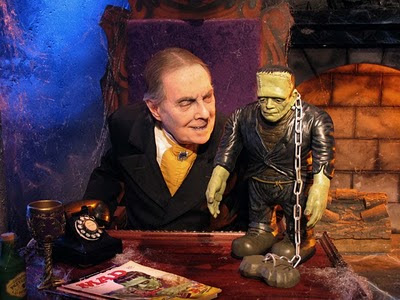 The documentary features insights into the sculpting, production and marketing of the classic AURORA kits from some of the people who originally worked on them as well as memories from such fans as artist Daniel Horne, Sideshow Collectibles sculptor Mat Falls, actor/sculptor Jeff Yeagher and Moebius Models owner Frank Winspur on how the kits inspired them until today.
One highlight of the documentary is an interview with famous illustrator/artist James Bama, who created the vivid and color dripping box art for the monster model kits back then. 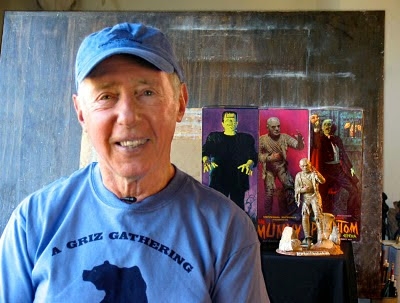 Now get your Paypal ready and order yours today! And the other good news is ... there is a sequel on the way already! Stay tuned! 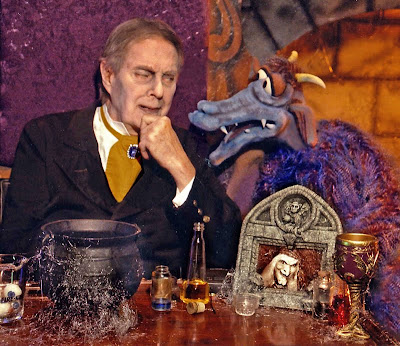 I was a Teenage Frankenstein ...

Some might have noticed it in the past days anyway: After two years it was time to give the place here a little facelift, I hope you like the changes and bear with me that it's still a work in progress here. The buttons on the right side sends you directly to the »up-to-date« paintings, sketches and of course garage kits.
After the unwanted break my accident forced opon me I'm happy to present you the first new piece of linework: Teenage Frankenstein. Done in November as a pen & ink drawing and colored with Photoshop recently. There is more in this vein to follow, so stay tuned! 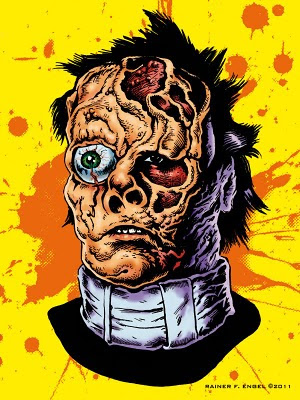 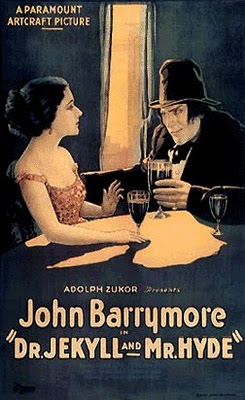 »Dr. Jekyll and Mr. Hyde« (1920) starring John Barrymore is most celebrated silent screen version of Stevensons classic tale. Dedham Pond Designs released an very nice interpretation of Mr. Hyde based on Barrymores performance. Sculpted by Joe Simon und with boxart by yours truly. The build up used on the box art was done by Charlie Coleman. Thanks to Todd Powell for giving me the opportunity to paint this human wreck! The model is 1/8 scale and cast in resin, easy to assemble and tricky to paint (if you want to match the fancy morning coat Barrymore wore in this scene from the movie). Get yours here and learn more about this project from Todd himself. There is even more to read about Garagekits and the people who make them on his blog »Resin the Barbarian«. 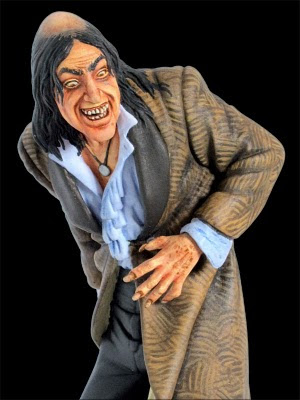 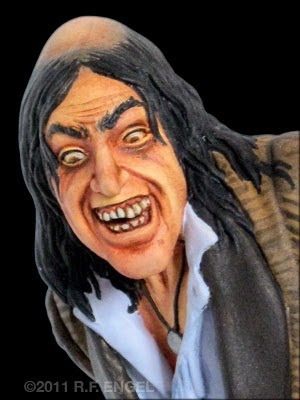 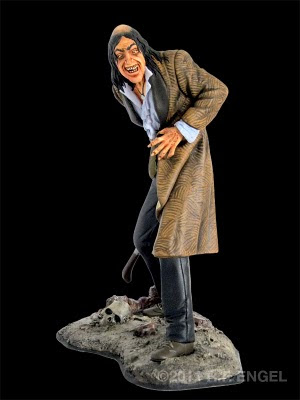 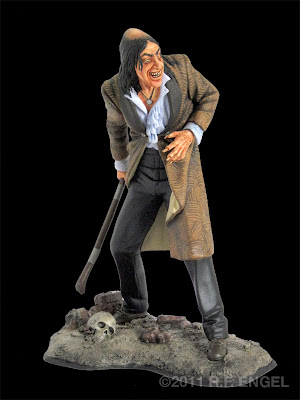 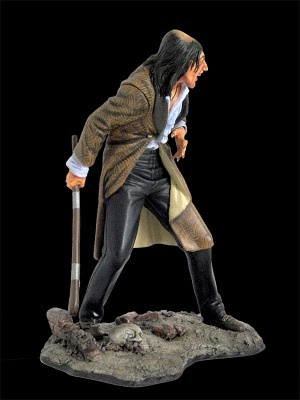 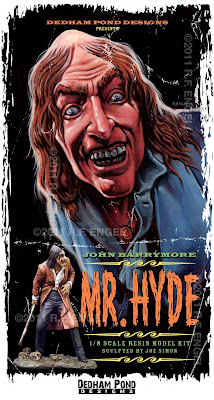 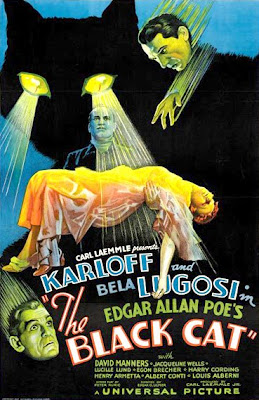 »The phone is dead. Do you hear that, Vitus?
Even the phone is dead.«
Hjalmar Poelzig
»The Black Cat« was directed by Edgar G. Ulmer, an German/Czechoslowakian emigrant in Hollywood. Here are two busts of the main characters of this 1934 Universal release sculpted by Ray Santoleri. Boris Karloff is Hijalmar Poelzig, a shady Austrian architect with an questionable past and preferences. His former friend Dr. Vitus Werdegast, seeking for revenge, is played by Bela Lugosi. Instead of the usual gothic haunted houses of Classic Horror movies, former set designer Ulmer created an modern, elegant »Bauhaus« inspired fortress as a background for his story of Necrophilia, Satanismn and treason.
Ray really achieved a perfect likeness to both actors with these sculpts. Painted with acrylics, airbrush and pastels. 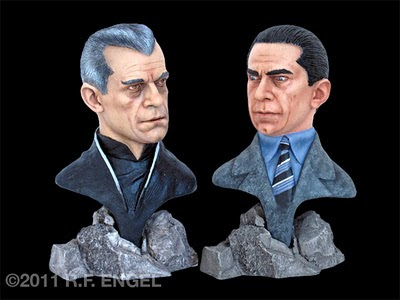 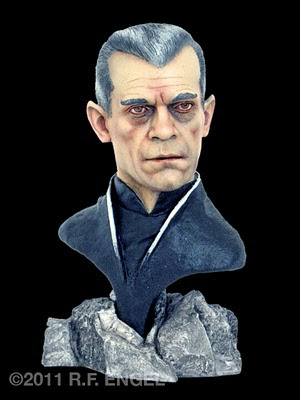 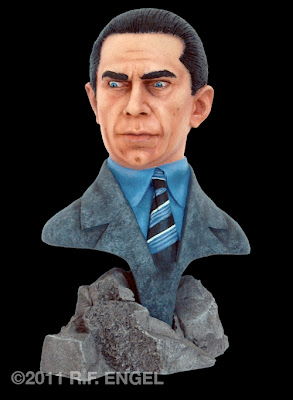 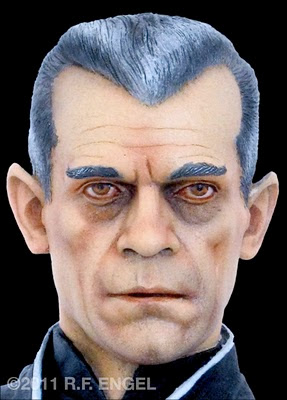 »You say your soul was killed, that you have been dead all these years. And what of me?
Did we not both die here in Marmorus 15 years ago? Are we any the less victims of the war than those whose bodies were torn asunder? Are we not both the living dead? And now you come to me, playing at being an avenging angel, childishly thirsting for my blood.
We understand each other too well. We know too much of life.«
Hjalmar Poelzig 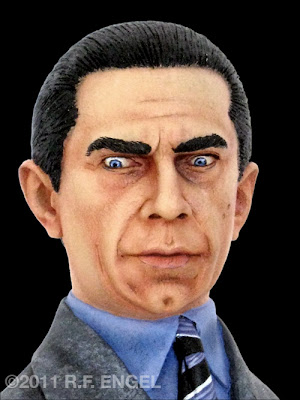